Join Vegans, Baby for a special vegan tour of Thailand this April!

Do you dream of going to Thailand but don’t have anyone to travel with? Or, do you want to travel to Thailand and not have to deal with organizing the details of the trip but know the trip will be everything you could want … and more? Or, do you simply need a reason to head to the Land of Smiles? Regardless of what your reason is, the Vegans, Baby vegan tour of Thailand is going to treat you to some magical (and possibly life-changing) experiences! This 10 day/11 night tour in four-star luxury properties includes 20 vegan meals and visits to three locations in Thailand.

From exploring a jungle in the heart of Bangkok to learning how to cook plant-based food from a renowned chef at one of the best plant-based cooking schools in the world  (located at a lush resort where you will stay), to experiencing Songkran (Thai New Year, which also happens to be the world’s biggest water fight) to eating delectable vegan cuisine every step of the way, Vegans, Baby’s Vegan World Tour: Thailand is the tour you’ve been waiting for.

This Vegan World Tour happens only once-a-year, so reserve your spot today. All you need to sign up is a deposit!

This tour is curated by Vegans, Baby’s Diana Edelman, who spent nearly three years living in the country and returns each year to devour all of the amazing vegan food, indulge in inexpensive massages (under $10 for an hour!), relax on tropical islands and experience the beauty and charm of Thailand.

Diana’s no stranger to tours, she co-hosted a vegan tour of Thailand October 2019, and her local Las Vegas tour was named one of the top nine tours in the world by Travel + Leisure.

This tour treats you not only to amazing experiences you won’t find on any other tour, but also to some of the best vegan food in the country and a local tour guide to share information and history about Thailand and its gorgeous culture. Unique to this tour is experiencing Songkran in the heart of the action — Chiang Mai. Held every April, Songkran is an incredible and fun experience you’ll be talking about forever.

Welcome to the Big Mango, what the locals call Bangkok Krung Thep the “City of Angels”. The vibrant capital of Thailand is bustling and full of life, offering a glimpse into Thai culture tucked down the sois (narrow lanes) and behind the busy streets and tall buildings. Check-in to the hotel after 2 p.m. and then the afternoon is yours to take a nap, swim in the salt water pool, get a massage, or go explore the Bangkok neighborhood before a meet and greet at 6:30 p.m. in the hotel lobby. After that, the night is yours to explore the heart of the Sukhumvit neighborhood lined with restaurants and nightlife, hit up the craft cocktail bar next to the hotel (their drinks are amazing) or get some rest. Enjoy breakfast at the hotel before we step back in time on half-day tour of the famous and vibrant Damnoen Saduak Floating Market and the Talad Rom Hoop Market.

We journey via private transportation 100 km from Bangkok to Thailand’s most well-known market. The floating market delves back to a time when the canals were the primary mode of transportation and the market was floating. Today’ we’ll hop on a longtail boat to catch a glimpse of an ancient way of life, slowly skimming by narrow canals, wooden houses on stilts and more. Once we’re off the boat, we’ll head to the market where there is everything from fresh fruits, flowers, clothing, art and souvenirs to check out. You’ll have time to shop or grab a fresh, icy cold coconut to cool you off.

Then, it’s on to Talad Rom Hoop, which translates to “closing umbrella or awning.” This market, which runs from the early morning to evening, is located on an operating railway and a train passes through the market eight times every day. As the name implies, a few minutes before the train comes through an alert sounds and vendors selling everything from fresh fruits to clothing, quickly whisk their wares away, lift up their awnings and move from the tracks so the train can pass through and the two can co-exist. Within seconds of the train passing by, it’s back to business as usual. It’s truly something to witness. For visitors, it’s exciting but for the locals, it’s business as usual since the market was there long before the tracks. After exploring these two markets, we will head back for a late lunch in the city at a local restaurant with both Thai and Western options. At night, we’ll give you our top picks for where to head out and you’re free to explore the energy and nightlife of the city.

Bangkok isn’t just a bustling city; it’s also home to a magnificent jungle. Today, you’ll hop on a bike and tour the green oasis (known as the Lungs of Bangkok) with weaving canals and markets. The tour starts with a leisurely ride through Benjakiti Park, then through the local Khlong Toei market, one of the biggest fresh markets in Thailand. It continues to the river pier where you board a boat and cross the Chaya Praya River and head to the green side of the Bangkok, Bang Krajao. After the ride, we head to dinner which features Thai and Western options. Prepare for a morning of amazement at one of Thailand’s most famous landmarks, the Royal Grand Palace. We arrive to the palace gates and then your guide will take you around the magnificent palace grounds and its expansive complex, which was home to Thai kings until the turn of the 20th century. It’s still a seat of power and the spiritual hall of the Thai kingdom. The palace has throne halls, two of which are open to the public. Here, we the Temple of Emerald Buddha, Wat Phra Kaew. This revered Emerald Buddha dates back to the 14th century. The grounds also feature six-meter tall statues of colorful demons from who guard the Emerald Buddha and ward off evil spirits. After the tour, we head to lunch and then on to Hua Hin, thenext city on our tour. After a massive buffet breakfast featuring homemade vegan breads, fresh and exotic juices and savory eats, we visit Blue Lotus, a renowned plant-based cooking school that trains chefs and foodies on the art of creating exquisite plant-based cuisine. Led by experienced chefs from around the world, you’ll use local ingredients and prepare a meal. If you’re still hungry after feasting on the dishes you create, you have a free night to dine at the property’s numerous restaurants or head out to another restaurant, wander the grounds of the hotel which grows its own herbs for its restaurants, wander along the waterfront, indulge in a Six Senses spa treatment or just unwind in your luxury room. We’re half-way through the tour and today you get the day to do whatever you’d like, whether it’s hanging out at the pool, taking advantage of the free shuttle and heading to the beach, getting spa treatments or hopping on a free bike and exploring the area. Today is a travel day and we head from Hua Hin back to Bangkok to catch a flight to Chiang Mai in Northern Thailand. The Rose of the North, Chiang Mai is a super-relaxed city dotted with quaint coffee shops and meandering sois. After check-on at the vegetarian resort, you can take a dip in the pool, explore the winding, tiny sois and grab some food, then we head to the Night Bazaar to experience the Chiang Mai Ladyboy Cabaret. Grab that long-sleeved shirt you brought because today you’re heading to the magnificent Doi Inthanon National Park. About an hours drive away from old town Chiang Mai is the highest peak in the country, Doi Inthanon. Also known as “The Roof of Thailand”, this national park covers an area of 482 km, and  features  waterfalls, cloud forests, and spectacular views. We’ll stop at an ethical hill tribe village and some local temples via Jeep, then it’s on to the park. After that, we visit the Royal Project, a government-backed program designed to support local villages. Then, it’s on to waterfalls. Once back in the city, we head to a spa to unwind with a massage. After that, the night is yours to hit up food stalls or dine at the hotel.

Chiang Mai is the place to be for Songkran — the Thai New Year — which also happens to be the world’s biggest water fight. Head to 7-11 and buy an inexpensive water gun or bucket and get ready to get soaked on the streets of the city. Young and old, Thais and foreigners, come together for this epic water fight with the heart of the action taking place just outside the ancient walls of Chiang Mai and Thaepae Gate. Here, there’s not only water fights, but stages set up with performances.

If you prefer a more local experience, head north or south and wander the sois where locals stand outside with buckets full of icy water which symbolizes cleansing and shows respect, as well as wishing luck and prosperity for the coming year. It’s common to meet locals and spend time with them celebrating together.

Or, if you want to see the more religious side of Songkran, head to any temple in the early morning to give alms to the monks. Then, explore the temples during the day as Buddha statues are gently sprinkled with water and watch as colorful processions with scared Buddha statues are brought out of temples. Discover hidden corners of Chiang Mai on this half-day bike tour. An off-the-beaten path journey, the tour takes you to the lesser known cultural highlights like local temples, schools and markets. It includes stops at the temple ruins of Wiang Ku Kam, the Ping River and a local market to learn more about the rich Lanna history. After lunch, the second half of the day is yours to explore the city. 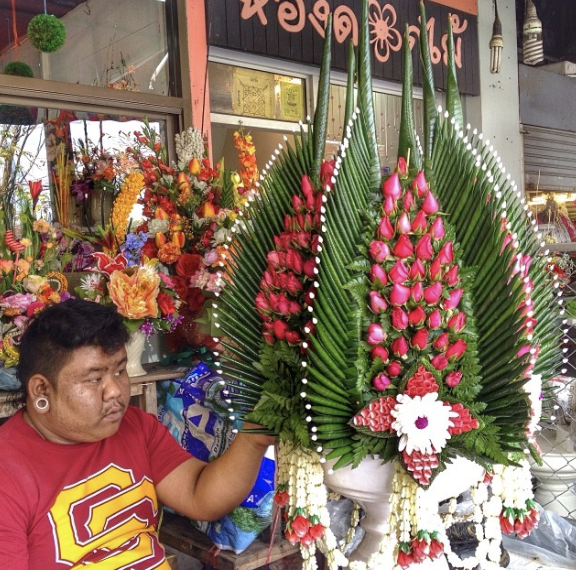 After breakfast, we’ll head to the local Warorot Market located beside the Ping River. A blend of Thai and Chinese, this massive area is packed with vendors selling local crafts, flowers, produce and more. We’ll navigate the landscape and then grab lunch before the vegan Thailand tour ends and we check out of the hotel.